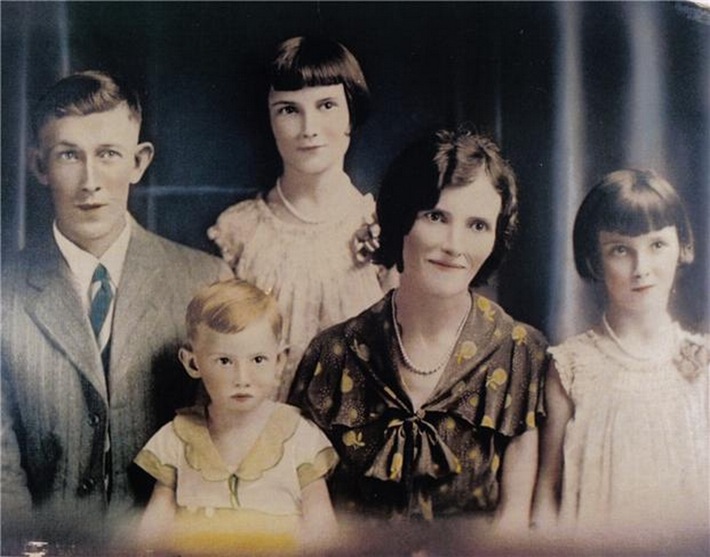 As I put together the hearth room makeover, my thoughts are flooded with memories of the 1950’s, because this is the era from which I am drawing inspiration.

The photo was taken, during the very early 1930’s, around the time my grandparents built their home, on North Adams.  This is the home I remember best, from my childhood, in the 50’s.

My mother is on the right, in front.  She told me she was mad as an old wet hen, the day the picture was taken.

Mother was always rough and tumble as a child.  She never grew as tall as 5 feet and for most of her adult life she weighed no more than 90 to 95 pounds, but she was a real scrapper and a fierce defender of her little brother, “Sonny” (seen in front) and others she loved.

The day this photo was taken, Granny and Mother had a real go ‘round about those pearls, Mother is wearing.  What a battle that must have been.  Mother did not want to wear those pearls.  As you can see, Granny won that battle.  Two strong women, who handed down that strength to me.

My Aunt Helen, I wrote about in January, is standing behind Granny and Granddad. 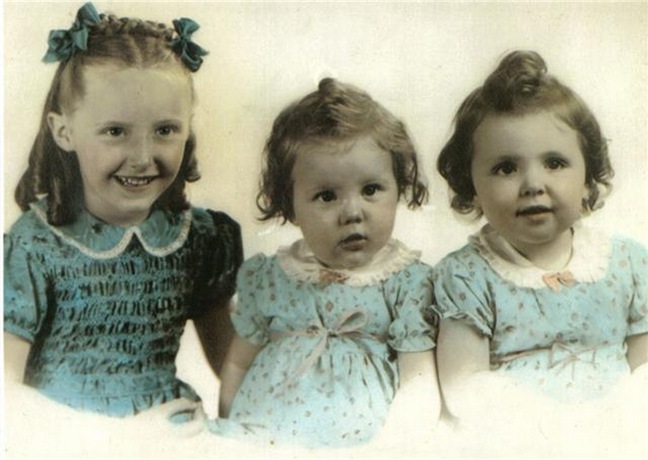 Do you remember Zuzu, from the movie, It’s a Wonderful Life?  To me, Shirley looks very much like the child who played Zuzu.  Every time I see that movie, a favorite of mine, I think of Shirley.

Granny didn’t have a lot of artwork, in her home.  She had family photos, on the walls and atop the upright piano, in the living room.  The photo above, was one of those above the old piano.

Shirley was around 5 years old, Billie was about a year old and I was 2, when this photo was taken. 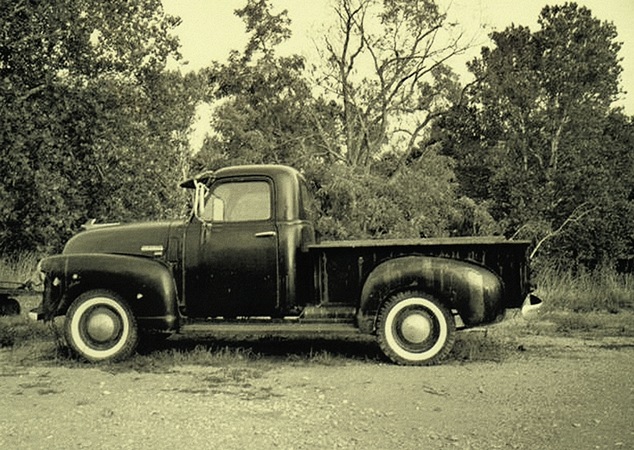 This was J’s 1950 Chevy pickup.  He sold it when we moved from the farm, in 2003.  I drove this old pickup.  What an experience.  Vice grips were used as door handles.  More than once I had to crawl in and out of the windows!  I wonder if I can still drive a standard transmission.  Is it like riding a bike?  Never forgetting the how to’s? 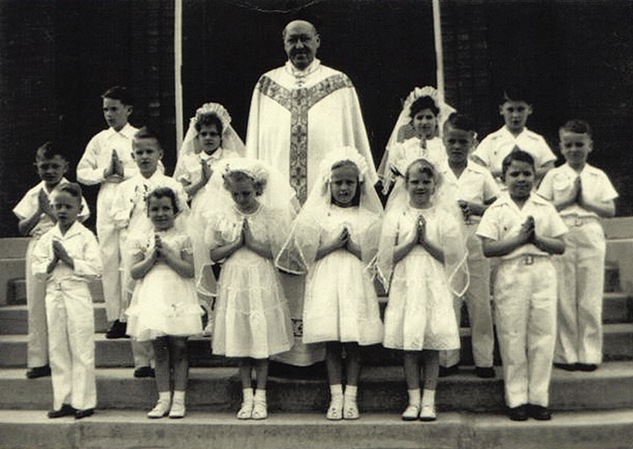 The photo has been posted here previously. I’m adding it again, because it was taken in 1952 or 1953 and fits the theme of this post.

This is J’s First Communion photo.  He’s seen second from right in the second row. 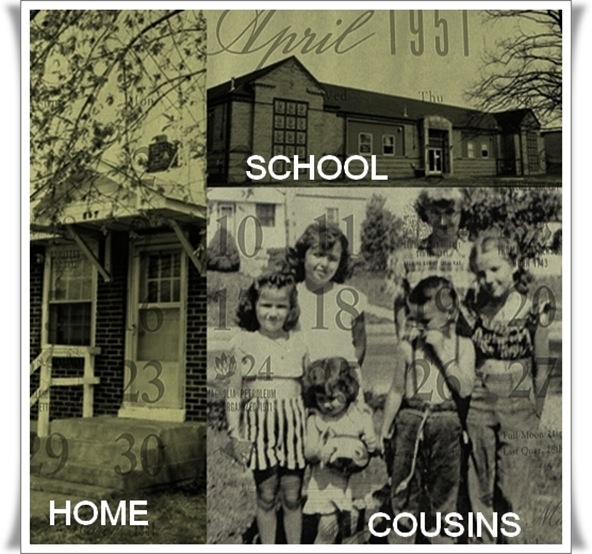 The photo of my cousins, sister and me, was taken in 1953.  This is one of my favorites.  Tommy has a rope and suspenders holding up his jeans, for some reason.  The poor guy was out numbered, being the only boy.  No memory of why I’m glancing down at my youngest cousin, nor why Tommy is looking over. I wonder what distracted us.

In the background is one of the homes in my cousins’ neighborhood.  I believe these homes were built, after WW2.  Many were purchased, by returning veterans, with a GI loan.  Fifteen years after the photo was taken, my first husband and I purchased a home, using this same sort of loan.   Are GI loans still available for veterans?

The steps and front door of the small brick house, where our family lived in the early 50’s, are shown in the photo marked home.

I went to school at Maplecrest School, seen in the collage.  The smaller windows replaced original large windows.  Other than that, this section of the building looks very much like I remember it.

We lived next door to the school, in the little brick house. 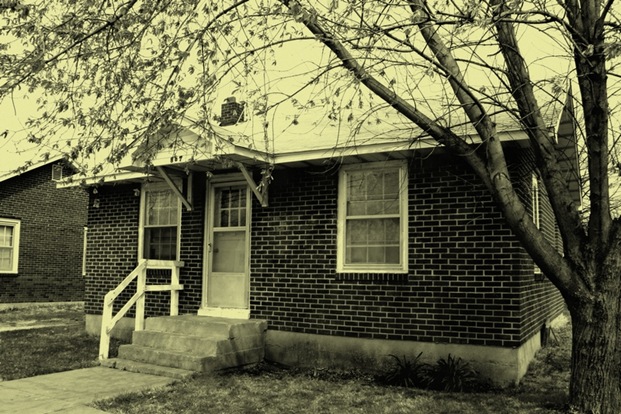 I don’t think we lived there very long.  I believe I was around 7 years old, at the time, which would be around 1950-51.  I do know we were living there on Halloween.

There are four identical homes, all in a row.  I remember Halloween, because of the unusual treat we received from our neighbor, who lived in the first house.  She ran out of sweet treats. All she had left was a bag of turnips.  She gave us each a turnip, which we ate raw with a little salt.  I still like raw turnips to this day.

I wonder what kids, today, would think if they got a turnip in their Trick ‘r Treat bag.

The photos of the school and house were taken in April 2009. 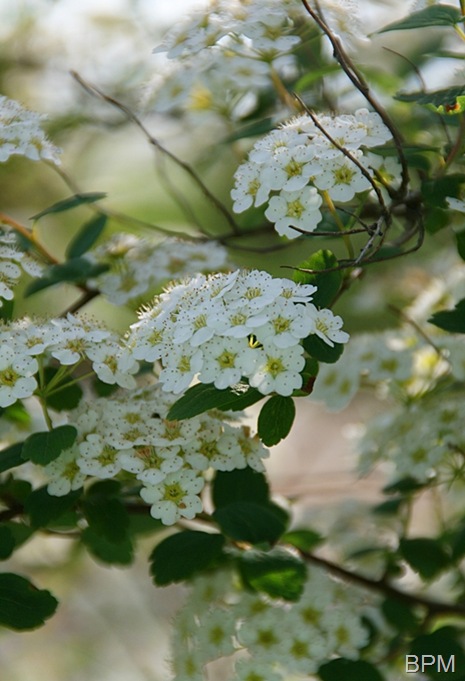 A spirea bush grew beside my grandparents’ driveway, during the 1950’s.

The makeover is progressing.  Not entirely 1950’s, but with 1950’s style elements.  We are enjoying the process.