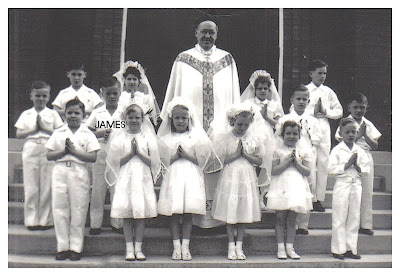 The cute kid in the second row, second from left, is celebrating his 63rd birthday, Saturday August 23rd. This photo is from 1952/53, when J made his first communion at Sacred Heart Church. 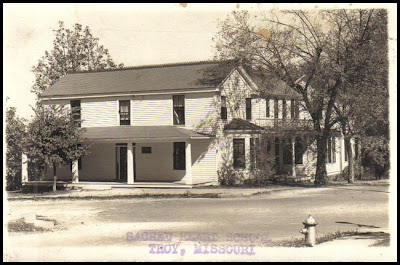 The above photo shows the school, J attended, during the time of the first photo. The church building burned, in the 1950's. The new church was built on the site of the school. During construction, J and his brothers walked three miles to town, then boarded a bus for an 8 mile ride to a small town where they attended school, until the completion of construction. The building is now Stefanina's Restaurant. I'll write more about the restaurant in a future post. 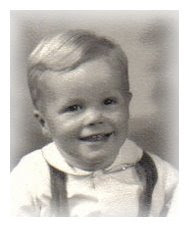 Baby J, at left and his bride, Baby Patty Ann, below. *************************
I had a very good report at our routine medical check ups, yesterday! J, on the other hand, gave Dr Z something to make his day a tad more interesting, as usual.
J's medical history is a story, in itself. He fell out of the hay loft, at a young age, which resulted in a cracked scull and a slight stammer to his speech, that stayed with him, until he met me. Do you suppose all that was needed was the love of a "good woman"? In any event, it disappeared around about the time we celebrated our 1st or 2nd anniversary and only reappears when he is flustered. That fall from the hay loft was the beginning of J's interesting medical history, which includes, a chain saw to the foot, bullet wound to the shoulder (accidentally self inflicted), cow stomped feet and various surgeries for this and that.
With this history, it came as no surprise to us, when we noticed J's amazing shrinking arm! A couple of months after his cancer surgery, last April, J began to notice his wedding band no longer fit properly. We chalked it up to weight loss, due to the surgery. But then, we began to notice a marked difference between his left arm and right. J has had surgery on both shoulders. He wondered if that might have something to do with the muscle atrophy.
During our exams we always share an appointment and we are always in the same room. Yesterday, we had a great discussion with Dr Z, who is a wonderful physician and has an interesting story of his own. It is his theory J has a pinched nerve in his left shoulder or neck, which is causing the atrophy. During the surgery, last spring, J was on a table, with his feet elevated, his head down and arms outstretched and secured. We believe this is when the pinched nerve occurred. J has an appointment with a neurologist in September, when we hope this mystery is solved and he recovers the muscle in his left arm, soon.

********************************************
We're busily preparing for the visit, next week, of my old school friend, Aunt Pittypat, from Wisconsin. We're excited at the prospect of our friend spending time with us, in our home!
Have a wonderful weekend!
Just a note:
Lana at Honeysuckle Lane is having a fun giftaway. Click on the picture at the top of my sidebar for details.
Posted by PAT at 8/21/2008
Email ThisBlogThis!Share to TwitterShare to FacebookShare to Pinterest
Labels: Family
Newer Post Older Post Home