Not only does this post show a partial collection of baskets, it also shows my early photography skills.  Perhaps some improvement has been made over the past three years.  I hope so.

I’ve added two sweet grass baskets, to my collection, from Charleston, South Carolina, since the photos were taken. They are at our lake place

Stop by Barb’s, each Tuesday, for vignettes, tabletops and accessories. While looking through my books, this morning, I rediscovered several volumes of the Foxfire books. I began reading these books during the 1970's. I've enjoyed them over and over again, through the years. Foxfire consists of several volumes, telling the stories and customs of the people of Appalachia.
As I picked up the first volume, it fell open to the chapter about White Oak Splits. I have several White Oak Split baskets, handmade by Missouri Artisans. They are beautiful in their simplicity. The smallest basket, in the photo, was purchased in 1972 or 73. It is from a basket maker at Silver Dollar City, near Branson, MO. Years later, I was at a craft show in Wentzville, MO., where I met the daughter of the SDC artisan. She was carrying on the basket weaving tradition. I was so happy to be able to purchase one of her baskets. We have it at our weekend home, at The Lake of the Ozarks.
The two larger baskets, toward the front, were made by a Washington, MO artisan. I purchased them at a festival near Marthasville, MO, during the 1990's. The dark basket toward the back is another example of White Oak Split basketry. It's over 100 years old and was purchased at an estate auction.
The little chair was purchased on South Main Street, Historic St Charles, MO. We found it at the shop of an artisan. We owned a rocker that needed a new seat and took it to her for restoration. She too, was carrying on a family tradition of White Oak Split weaving. When we picked up our rocker, the little chair came home with us, too. It now sits at a small writing table in our kitchen.
During the 1970's, students at my hometown high school, began a project similar to Foxfire. Their publication was called Bittersweet. It has been described as a "Foxfire of the Ozarks".
http://thelibrary.springfield.missouri.org/lochist/periodicals/bittersweet/index.html 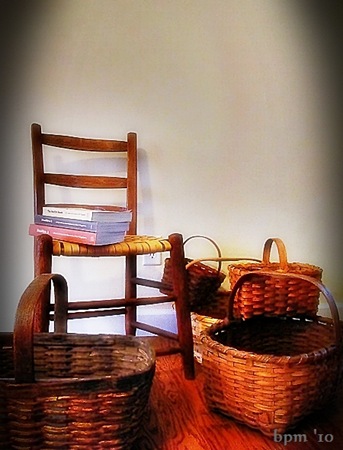 Thank you for the wonderful response to “In a Fog”.  When I wrote that post, I was in a reflective mood.  More about that, in a minute.

I see from your comments, we are of like minds.

I love receiving comments. Whether there are 5 or 100, I read each of them.  Many times, I read them more than once.  I don’t believe they are a gauge of the popularity of Back Porch Musings. They are from folks with interests similar to mine, who found something, in a post, that connected with them.

The commenter’s vary from post to post.  I do find it interesting, seeing which posts garner more comments than others. Decorating posts are my top comment getters.

Back Porch Musings’ content will remain the same, as it has from the beginning. I’ll change the look of the page, from time to time, perhaps.  Right now, I like the way it looks, so it will remain, at least for awhile

The above post was published during my first week of blogging. There were 4 comments; one of which was mine.  That was before I figured out about answering comments by going to the commenter’s blog, e-mailing, or leaving a note on future posts, rather than answering within the comments of my post.

As the Back Porch has grown, I’ve found it more difficult to get to everyone and leave a comment in return.  There are times, when I seem to be on the computer several days, all day and time flies by.

If I don’t get back to you, always, I hope you know how much I appreciate your visits. I am in no way snubbing your efforts.  In fact, I am there reading, even though I don’t always leave comments.

A Collection of Memories

My Aunt Helen passed away Friday morning (1/15).  Her passing put me in the reflective mood, mentioned above.

When I read the post about cliques, on that dreary day, I thought of what Aunt Helen would have said, about the post that seemed to patronize bloggers, like me, who write of everyday ordinary things.  I could hear her say, “Patty Ann, you can do anything”.  That thought sealed my resolve to carry on, as usual, at the Back Porch.

As I thought of the days before Alzheimer’s came to steal my aunt’s memories, I remembered the legacy of memories she left her family.

Aunt Helen, born in 1920, was my safe harbor and light, in the sometimes stormy seas of my childhood.  In my book, she was an amazing woman.  She and my uncle raised 4 beautiful children. She went to work for the city, during the 1950’s and continued working for the city for the next 30 years.  She had a beautiful voice and sang in the church choir.  Her sense of humor was fabulous.  I see that humor in my children.  I seem to have it too.  Perhaps it’s inherited.

Aunt Helen was an exceptional influence in my life.  For this I am forever grateful.

During my reflections, over the last several days, I looked at the beautifully wrapped collection of memories, left by my aunt.  As I lifted the cover, the memories, like butterflies, fluttered up from the tissue of time. I grasped each one, held it to the light and savored it.