Dogwood, Redbud and a Castle in the Ozarks 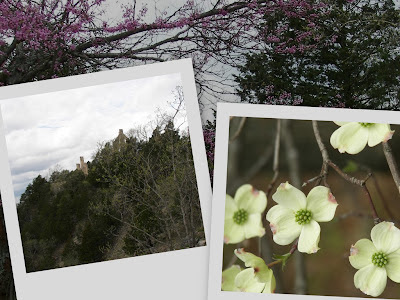 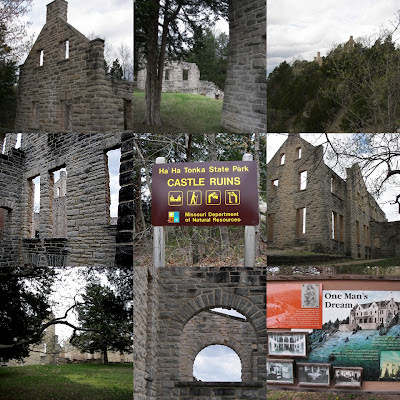 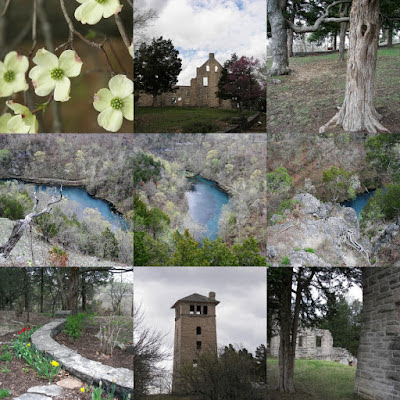 We visited Ha Ha Tonka State Park, near Camdenton Missouri, Saturday. Although the sky was overcast, the temperature was ideal for walking the trails.
Construction of this castle in the Ozarks, began in 1905. Unfortunately, the owner Robert M. Snyder, never saw his dream home completed. He died in an automobile accident in 1906. His sons completed the construction. The castle and gate house were destroyed by fire in 1942.
It's interesting to walk around the ruins, imagining what it might have been like living there during the early 20th Century and wondering about the tragedy that seemed to surround the castle.
Other photos within the grid are views from overlooks on the castle grounds.
The state of Missouri purchased the property in 1978 and opened it to the public. 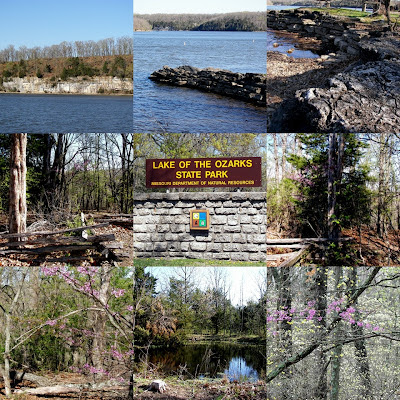 These photos were taken at Lake of the Ozarks State Park. We drive through this park on our way to our condo at the lake. A drive through the park is beautiful in any season. Thursday evening, when we drove into the park entrance we discovered Redbud trees and Dogwood trees in bloom. The last photo in the bottom row, shows a Redbud tree with Dogwood in the background. Other views are from around the park. Several views of the lake, a pond along the road to our condo and split rail fence at a shelter house.
Missouri State Parks are open to the public, at no charge. Of course, we love them all! We are very proud of our state's park system. 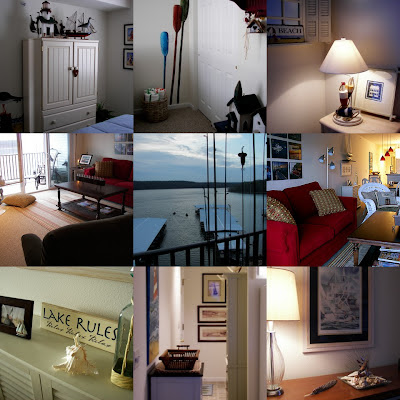 This last grid consists of photos taken at our "weekend retreat".
Over the weekend we visited an antiques shop or two. I made a couple purchases. I'll be writing about them later this week. One of my finds had a mishap...or rather I had a mishap!! More about that and other "news" later.
Happy first week of April 2007!
Posted by PAT at 4/01/2007
Email ThisBlogThis!Share to TwitterShare to FacebookShare to Pinterest
Labels: Ha Ha Tonka, Ozarks, Weekend
Newer Post Older Post Home