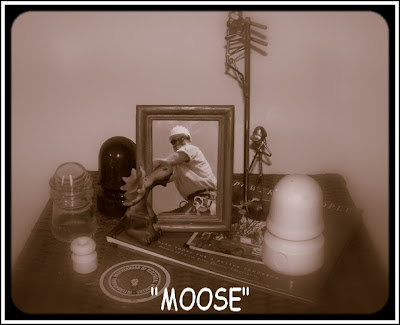 Not long after J completed his military service, he applied for work at our local rural electric cooperative. In April 1968, at the age of 22, J began his career as an electrical lineman. His entry level position? Brush Cutter. He helped clear the way for power line construction. Eventually he became a lineman.
Tomorrow marks J's (age 62) last working day at the cooperative. Through these nearly 40 years, he has worked in just about any weather condition, including snow storms, thunder storms, tornado aftermath, ice storms, floods, 100+ temperatures. Best working weather of all, pleasant spring and autumn days.
Practice pole top rescues occur every so often. Last spring, J surprised the younger linemen, with his expertise in pole top rescue, at the ripe old age of 61. At this time, J has been employed longer than any other employee at the cooperative. He is the "old man"!
Tomorrow evening, J is having a get together, with the "guys out back". For many years, J has been affectionately known as "Moose". I know he will miss working with them. I also know, those "guys out back" will miss Moose.
~~~~~~~~~~~~~~~~~~~~~~~~~~~~~~~~~~~~~~~~~
The Lineman's Life, written by Phil Brown-Craighead Electric Cooperative, sums up the story of J and linemen, everywhere.
_______________________________________
~The Lineman's Life~
When I was a young man, out of work and no pay,
I applied at a co-op, thinking this might be the way.
Little did I know, what the future would bring,
Cut a bush, trim a tree, do almost anything.
You start at the bottom and work your way up the ladder,
As a laborer or a groundman, it really didn't matter.
You hammer and drill and dig holes,
And hear old linemen say, "The money's at the top of the poles".
As a trainee, you think, there's got to be a better way.
I do all the work, they get all the pay.
But as time wears on and still climbing the wood,
You realize everything was for your own good.
Supper with the family, is a time to cherish,
With the ring of the phone, this time will perish.
To miss a child's recital or a ballgame or two,
Is nothing uncommon for men like you.
The birthday's you miss, the holiday's so dear,
Storms keep coming, year after year.
The career you have chosen, with hooks and gloves,
Makes a pretty good living for the ones you love.
The rain and the ice comes by day and night,
They roll in and out with a terrible might.
If at home, you'd seek shelter, fearing the worst,
At work, restoring power, is the thing that comes first.
It's not for the glory, for in the job, there is none,
It's just for pride and the love of a job well done.
When all is ok and the 1st rolls by,
You're only a rascal, who's rates are too high.
But when the storm hits and darkness is at hand,
They cuss us, they praise us, but we're in demand.
Then one day, as your working, right out of the blue,
An amazing thought comes to you,
Been a laborer, a groundman and even a climber,
As the years take their toll, now I'm just an old-timer.
Never go to work mad, start each day with a kiss,
In this type of work, who knows what you'll miss.
Tell your kids you love them and also your wife.
Storm's a coming, be late tonight, the lineman's life.
~~~~~~~~~~~~~~~~~~~~~~~~~~~~~~~~~~~~~~~~
Being Moose's wife is amazing in so many ways. And quite interesting, too. We never knew when the phone would ring at any time of night. Not long after we were married, we experienced a big snow storm. J was away from home the better part of that week. This happened quite a bit, through the years. Many times, the call in the night, would be to turn the power off at a home that was on fire or to go to the scene of an auto accident.
A few years ago, J's Cardiologist asked how long to his retirement. J was concerned, because he thought he would need to retire early. That wasn't the case...the doctor was just curious. J has inherited heart disease, bad shoulders, bad knees and bad back. But would not give up being a lineman, until retirement. He loved his job and working outdoors. J's choice of career was absolutely meant to be.
Edit Message: The poem is not my work. In my original post, you will notice a reference, concerning the author of the poem, Phil Brown from Craighead Cooperative. This is not a cooperative I'm familiar with. I have given Mr Brown full credit for the poem. I typed it, just as it was published at the original site. These are his words and I would not want to change any part of it.
I'm sorry if you did not see this acknowledgement and thought the work mine.
There was a question about cooperatives. Rural Electric Cooperatives are owned by the consumer. These cooperatives began many years ago. Through the efforts of rural electric cooperatives, power was brought to people in areas where there had never been electricity. These were usually farms and other rural areas of America. They provide everything the big electric companies do. "P"
Posted by PAT at 11/01/2007
Email ThisBlogThis!Share to TwitterShare to FacebookShare to Pinterest
Labels: Family
Newer Post Older Post Home