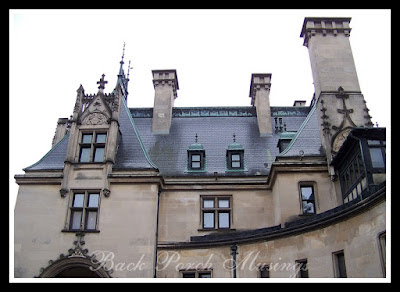 ~A view from the Carriage House at Biltmore Estate~

We arrived at Biltmore Estate, just after 9 AM, December 28th. It had begun to rain, not long before our arrival in Asheville North Carolina.

As we drove through the gate, we saw Bamboo forests, trees and other plants growing along a stream. Azalea and Rhododendron gave a whispered promise of Spring, just a month or two away.

It was difficult to believe there is a bustling world, just outside Biltmore Estate. Throughout the day, we had the feeling of being in a rural countryside, far from civilization.

Construction of Biltmore began in 1889, by George Washington Vanderbilt (1862-1914). The home was officially opened on Christmas Eve 1895.

The 250-room mansion featured 33 family and guest bedrooms, 43 bathrooms, 65 fireplaces, three kitchens and an indoor swimming pool. In 1930, the family opened Biltmore to the public. 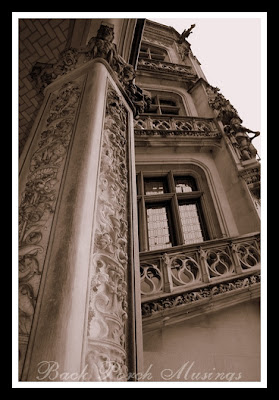 We spent approximately 5 hours at the estate. Rain continued throughout the day. North Carolina is in need of moisture. With this understanding, we enjoyed our day without complaint. 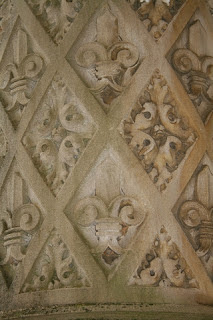 Photography of the interiors of Biltmore is not permitted. I was able to take a few photos of the exterior.
The photo, at left, shows the detail of the column, shown in the photograph below. 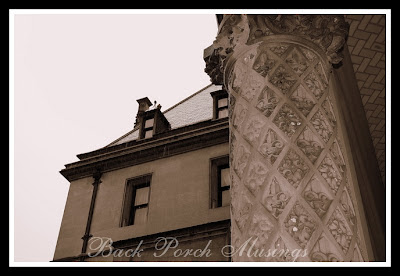 Our tour choice was self guided with book. There are audio tours available and tours lead by Docents. We were near a guided tour, at times and found it interesting learning about the mansion, through the Docent's words. We hope to return and would consider a guided tour, next time.
It isn't easy deciding about favorite areas of Biltmore. The room that comes first to my mind, is the Winter Garden, a conservatory filled with Poinsettas, Christmas greenery and other plantings.
Over 10,000 volumes, can be found in the Library. This room was another that stands out, for us.
The triple fireplace in the dining hall, is breathtaking. The oak dining table stretches 40 feet.
We climbed stairs to the 4th floor and back again. The wide circular stairway was the first. A wooden staircase leads from the third floor, to the fourth floor servants' quarters and rooms used by George Vanderbilt and his guests.
Oval and circular ceilings were in the rooms of ladies. The gentlemen's rooms had square or rectangular ceilings. All these rooms, as all the rooms of the mansion, were beautifully appointed.
I felt drawn to the maids' rooms. These rooms were larger than I imagined. The furnishings were very nice. The servants' hall was a larger room, in this wing, where the maids would relax or do mending. Bells for summoning were in this room, also.
Christmas trees graced almost every room. Biltmore was absolutely beautiful, this Christmas time. I can only imagine what it must be like in other seasons of the year. I would love to be there in Spring, when the Azalea are in bloom.

Above photo shows our view of the mansion as we were leaving. We decided to drive on to our hotel, instead of seeing the winery and other areas of the estate, choosing to save these for our next visit. 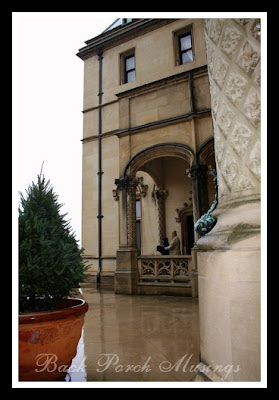 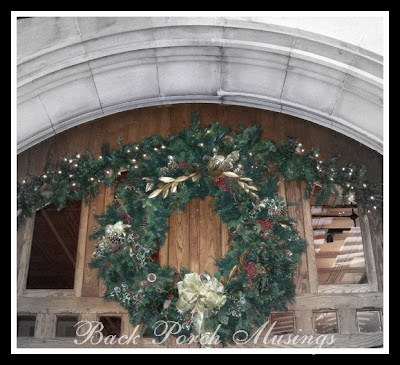 This wreath hangs over a doorway to one of the Carriage House shops. 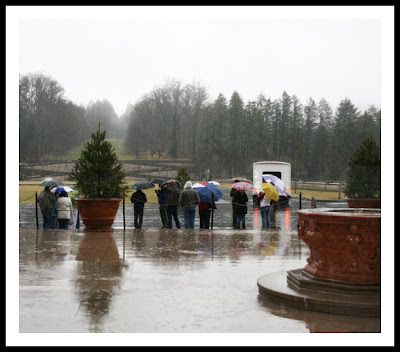 Visitors waiting for the shuttle back to the parking lots. 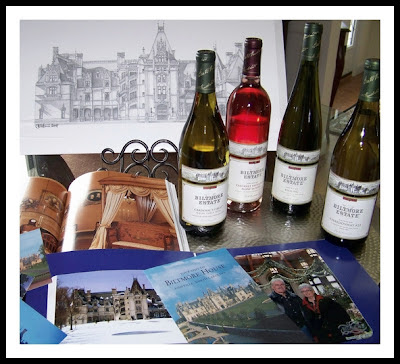 Our memories of Biltmore are the best souvenirs, our photographs another. Above are more keepsakes from our visit. A print of a pencil sketch, is seen in the background. The original drawing was begun in 1993, when the artist, Shane Kindschi was 15 years old. He presented the finished sketch to William A.V. Cecil in 1998, it remains in the Biltmore archives. Shane Kindschi was signing prints, the day we were there. He signed ours and added Christmas 2007. The book, a pictorial guide to Biltmore and our photograph beside the Winter Garden are other souvenirs of the day.
During our road trips, we often purchase wine from the region we're visiting. We brought home a mixed case of Biltmore Estate Chardonnay #21, Cardinal's Crest, Riesling, Cabernet Sauvignon Blanc de Noir and Christmas at Biltmore Estate. We opened a bottle of the Chardonnay, this week. It is very good, with a hint of buttery finish, which I love in Chardonnay. Mary, at Across the Pond, has mentioned Screen Door, an antique shop in Asheville. She graciously e-mailed directions. We spent more than an hour roaming the shop. I can understand why this is one of Mary's favorite places.
At Screen Door, we purchased this butterfly, made of scavenged materials, by artist Simone Wilson. It's found a home on our back porch shutter screen. The butterfly is another whispered promise of Spring. This is the final installment of our Merry Christmas Road Trip story. We returned home safely, Sunday December 30 and only got lost once!
***********************************************
Maureen, at Penchants Ponderings and Posies, is hosting a delightful Winter White Giveaway. Click on Maureen's name and visit her blog. You will enjoy!
**I made a note to publish this final in the road trip series, Friday January 4th. However, we're preparing to spend a few days at the lake. This is why I chose to write this post a day early.
We'll return from the lake next week. Perhaps I'll find something to share with you, while we're away.
Thank you so much for visiting the Back Porch during 2007!
Have a wonderful weekend!
Posted by PAT at 1/03/2008
Email ThisBlogThis!Share to TwitterShare to FacebookShare to Pinterest
Labels: Road Trip
Newer Post Older Post Home