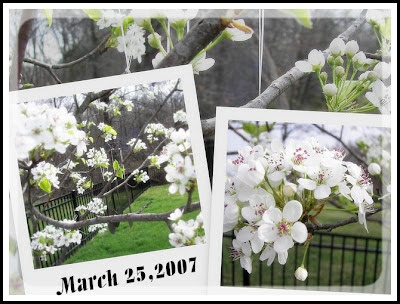 This photo collage shows a Cleveland Pear, non fruit bearing, as it looked a year ago, this week. The tree grows beside our patio. We had an early Spring in 2007. A week or two after this photo was taken, we experienced a heavy frost. Many of the already blooming plants in our yard and gardens, were blackened by the freeze. This caused the plants to bloom later and in some cases, like our Endless Summer Hydrangeas, there were no blooms at all during last year. 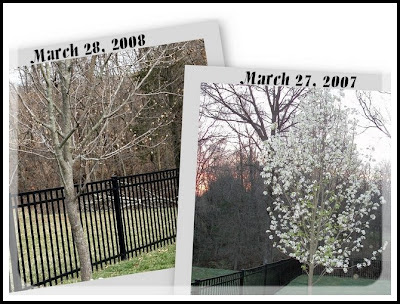 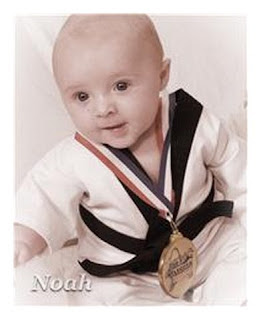 The photo, at right, shows four month old grandson, Noah, wearing the Black Belt outfit, given to him by Xanti's Tae Kwon Do Master. Of course, this gift called for photographs! Noah is wearing a gold medal won by big sis, Xanti, at a Tae Kwon Do tournament. Xanti, a 2nd Degree Black Belt, has studied TKD, since she was 11 years old. She's competed in many tournaments, locally and nationally. 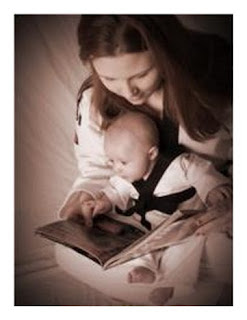 In this photo, Noah seems to be taking in every word, as he and Xanti read Black Belt Magazine.

The photos were taken, yesterday. I obtained permission from the copyright owner, to publish them here.
**************************************
We will be leaving for the lake, soon. I'll write a little something about Spring, in the beautiful Ozarks, when we return, Tuesday or Wednesday. Evergreen re-opens for the season, April 1st. I hope to stop by and see what Jason found at market, over the winter. Click on the link to find out more about this store, located in Osage Beach.
Thank you all for stopping by and your wonderful comments, during March! Most of all, thank you for being there, during this particular time in our lives.
Have a wonderful weekend!
Posted by PAT at 3/29/2008
Email ThisBlogThis!Share to TwitterShare to FacebookShare to Pinterest
Labels: Family, Seasons
Newer Post Older Post Home