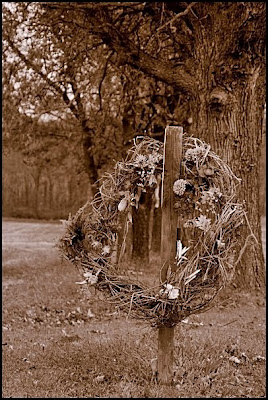 "November comes
And November goes,
With the last red berries
And the first white snow.

With night coming early,
And Dawn coming late,
And ice in the bucket
And frost on the gate.

The fires burn
And the kettles sing,
And earth sinks to rest
Until next spring."
~Clyde Watson~

And then comes December! 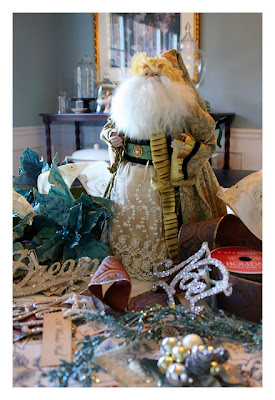 I'm gathering a bit of blue here and a bit of sparkle there, for Christmas in the dining room.

I found the Santa tree topper and blue poinsettias, seen in these photos, at the Kringles Christmas Shops, in Branson, MO, last week.

I am usually a traditionalist, when it comes to Christmas decorating. Over the years, I've collected several nativity sets and the customary colors in ornaments. I also have an extensive collection of Santa's. I've decorated trees in gold and trees in red and white. I've used feathers and birds and nests and dozens of Hallmark ornaments. But I've never done a Christmas tree with accents of blue, until now.

We've put together as many as 18 trees, in one season. Tall and small trees, themed and not. Every room had a Christmas tree, the year our home was on tour. We've had a decorated tree on the back porch, too.

This year, we decided to scale back, a tad, at first. While thinking over our 2008 Christmas decorating adventure, I had an idea to have a single tree. I should have known that twinkly little thought would soon fall by the wayside.

When I saw Santa in the gold and blue coat, I knew I had to bring him home. Inspiration for the Christmas scheme of things in the dining room. 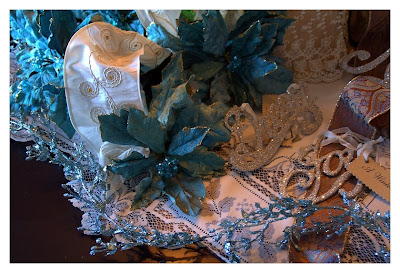 The glass glitter words are from Something Simple, in Eureka Springs, Arkansas. I purchased the wide cream ribbon last year, after Christmas. I'm considering using it on the stairs, with pine rope. The sparkly blue garland and copper and blue paisley ribbon are from Michael's. 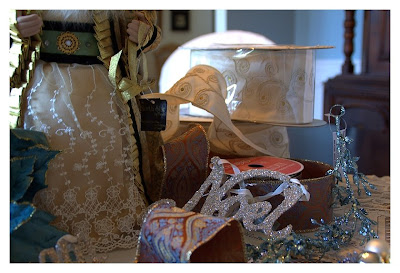 The dining room will be my first Christmas project. I have just about everything I need. I'll tell you all about it, with photos, of course, in a later post. 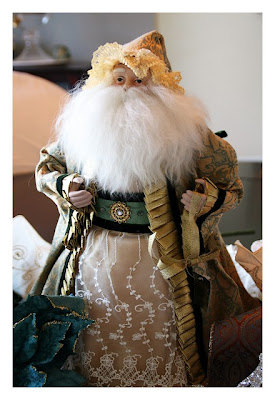 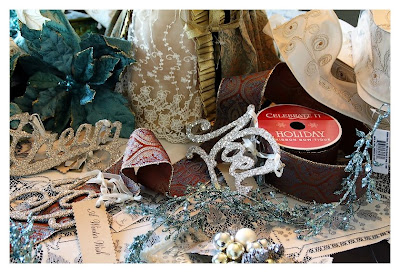 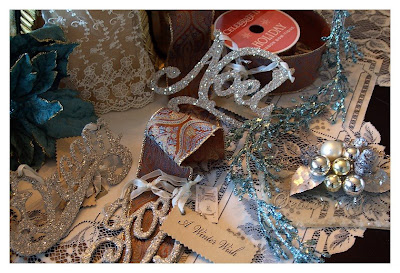 Today was a milestone, of sorts, for J. He had his first tooth extraction, at the young age of 63. You should see his x-rays! Wish mine were just half as pretty! Yes, the old fellow has very few fillings, one crown and, as of today, all but one of his teeth. He lost a Wisdom tooth and didn't even get to put it under his pillow.
~The top photo was taken, today, on the road near J's family's original farm, in Saint Charles County. The wreath on the post, with the trees and bare field, in the background, simply speaks of November.
Posted by PAT at 11/06/2008
Email ThisBlogThis!Share to TwitterShare to FacebookShare to Pinterest
Labels: Christmas, Decorating, Seasons
Newer Post Older Post Home