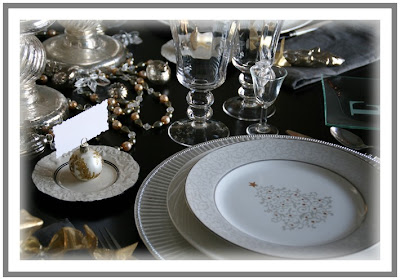 ~From the song, Silver and Gold, sung by Burl Ives (Sam the Snowman) in the animated feature, Rudolph the Red Nosed Reindeer, 1964~ 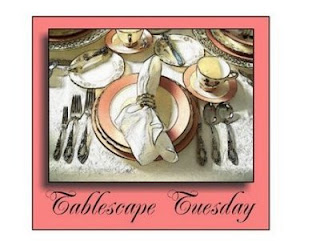 This Tuesday is the final Tablescape Tuesday before Christmas.

I set the dining room table in silver and gold, using pieces I've owned for several years and a recent purchase.
Between Naps on the Porch. 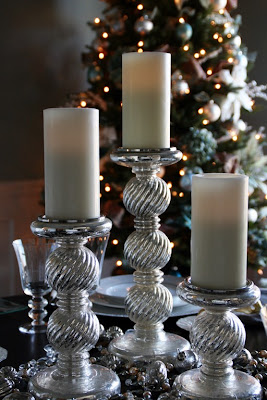 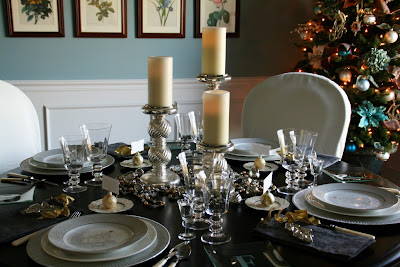 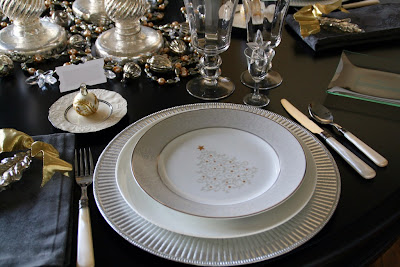 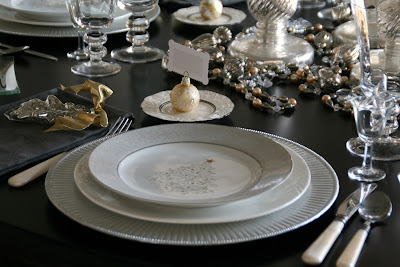 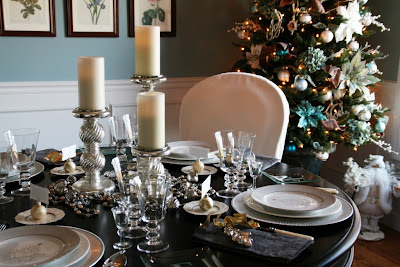 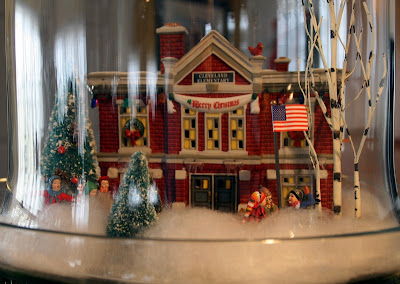 One of the many reasons J and I enjoy this movie is the era in which the story is set. I believe it is the 1940's, but it could easily be the early 1950's, when J and I were in grade school. The antics of the characters, walking to school in the snow, the houses, stores and vehicles; all call up memories from our long ago school days.

This year, we added to our village collection, with the purchase of Cleveland Elementary School and figures, depicted in A Christmas Story. The home of Ralphie (the boy who dreamed of Santa bringing him a BB gun) is on it's way to our home.

The school and "triple dog dare" scene is shown under a cloche on the kitchen island.

If you've seen the movie, you will remember when Ralphie's friend, "Flick" (Flick, Flick who?) was challenged, with a triple dog dare, to place his tongue on the frozen flag pole, just outside the school building. Flick's tongue promptly froze to the flag pole. The fire department was called to the rescue.

Because of the triple dog dare and Flick's dilemma, Ralphie's entire class was given a theme assignment. The subject: What I Want for Christmas. This was Ralphie's dream come true. He wrote a wonderful theme about the official 200 shot range model Red Ryder Carbon Action Air Rifle, he wished from Santa. Oh nooooo, you'll shoot your eye out!! 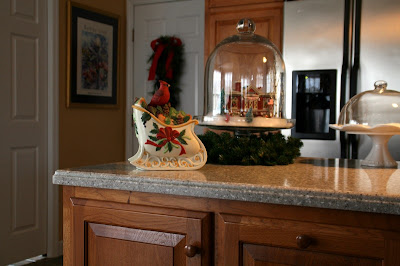 ~A Drew Story~
Please indulge a doting G'ma with a G'kid story.
Saturday, before last, Gabi and Drew were here. Facinated by the villages in the windows of the lodge, they rearranged trees and moved people around and entertained themselves, with the village, while their Mommy, Michelle, a member of my extra special tech support team, worked some magic with my computer.
Gabilicious and her little brother, almost three year old Drewbug, moved pieces from one window to the other, making up little stories as they played. At one point I heard a chink, as if two tiny figures had bumped into each other. I asked, did something break? To which Mr Man Drew replied, "Not yet."

I scheduled a Christmas card, to be published very early Christmas morning. Our family will be here for Christmas brunch, games and gifts.

I'll return with a post from the beautiful Lake of the Ozarks, next week.

Until then, MERRY CHRISTMAS!

I noted, in the previous post, I would be back Tuesday, December 23rd. However, I changed my mind, deciding to post the tablescape entry, today.
Posted by PAT at 12/22/2008
Email ThisBlogThis!Share to TwitterShare to FacebookShare to Pinterest
Labels: Christmas, Family, Tablescape Tuesday
Newer Post Older Post Home