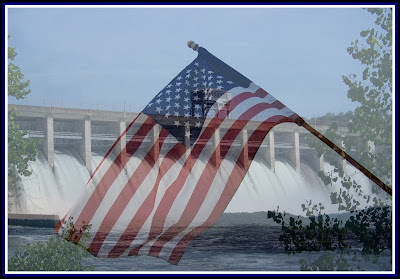 ~Old Glory and Bagnell Dam, Lake of the Ozarks, MO~ 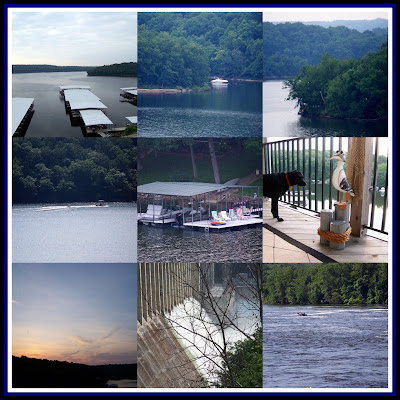 We drove to the lake, through heavy rain, Saturday morning, June 30th. There was more rain on Sunday. Monday the sun was shining and the temperatures were delightful.
We drove to Osage Beach, Monday, for provisions and a bit of shopping. Other than that, we stayed at the condo, relaxing and enjoying the quiet.
With July 4th falling on Wednesday, the kiddos were working everyday, except yesterday, and decided not to drive down.
J grilled, yesterday. We watched fireworks displays, last night. Visible, from our deck, were sky fireworks from a professional show at one of the resorts. Another smaller show was just across the cove. Both the professional and the amateur shows were beautiful!
The grid above shows shots from our deck and views of Bagnell Dam and the Osage River. I couldn't resist taking the centerpiece photo of a dock in our cove. The colorful chairs and life jackets say summer!
*********************************************** 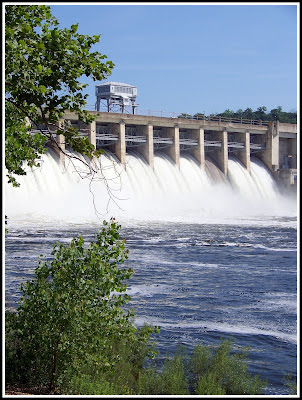 As we were leaving this morning, we drove to the banks of the Osage River, before crossing Bagnell Dam. What a surprise to see the gates open and tons of water rushing into the river! We watched from one side of the dam, then drove to an observation area on the opposite side.
I've been visiting the lake since I was a toddler, over 60 years ago. This was my first time seeing this scene. J talked to another onlooker, who explained, the flooding in Kansas had caused Truman Lake, just above Lake of the Ozarks, to have too much water. The Bagnell Dam gates are rarely opened. It was necessary to open them now, to relieve some of the pressure at Truman Lake. 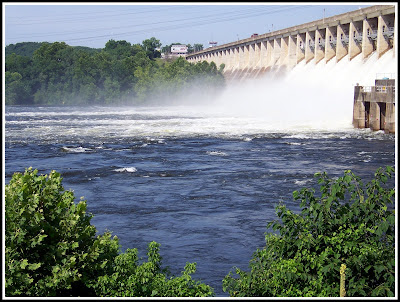 Bagnell Dam was constructed, over 75 years ago, as a power source for Union Electric (now AmerenUE).
http://www.funlake.com/history/osage_river_project.php